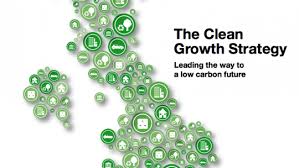 Much has been trailed about the Government’s Clean Growth Strategy since its launch last week.

But is it all hot air or are there some nuggets in there which will energise the debate about our country’s future direction and place on the world stage when it comes to putting the environment at the heart of Government policy?

We’ve taken some of the highlights of the Government announcement and summarised them below so clients can make up their own minds.

If you need to take action to ‘green’ your business as you grow, please don’t hesitate to get in touch.

‘This Government is determined to leave our natural environment in a better condition than we found it.

‘Clean growth is not an option, but a duty we owe to the next generation, and economic growth has to go hand-in-hand with greater protection for our forests and beaches, clean air and places of outstanding natural beauty.

‘There is no conflict between this aspiration and our plan to create an economy that works for everyone. But to do this we need a clear strategy that brings Government, business and society together. This Strategy sets out the action we will take to cut emissions,

increase efficiency, and help lower the amount consumers and businesses spend on energy across the country.

‘We have led the world in taking action to reduce carbon emissions. ‘We must harness the ingenuity and determination of all our people and businesses across the country if we are to build a better, greener Britain.’

Greg Clark, Secretary of State for Business, Energy and Industrial Strategy, said: ‘The move to cleaner economic growth is one of the greatest industrial opportunities of our time. This Strategy will ensure Britain is ready to seize that opportunity.

‘Our modern Industrial Strategy is about increasing the earning power of people in every part of the country. We need to do that while not just protecting, but improving the environment on which our economic success depends. In short, we need higher growth with lower carbon emissions.

The low carbon economy could grow 11 per cent per year between 2015 and 2030, four times faster than the projected growth of the economy as a whole.

This is spread across a large number of sectors: from low cost, low carbon power generators to more efficient farms; from innovators creating better batteries to the factories putting them in less polluting cars; from builders improving our homes so they are cheaper to run to helping businesses become more productive.

‘The transition to a global low carbon economy is gathering momentum. We want the UK to capture every economic opportunity it can from this global shift in technologies and services.

‘If we get it right, we will not just deliver reduced emissions, but also cleaner air, lower energy bills for households and businesses, an enhanced natural environment, good jobs and industrial opportunity.

The Climate Change Act, passed in 2008, committed the UK to reducing greenhouse gas emissions by at least 80 per cent by 2050 when compared to 1990 levels, through a process of setting five year caps on greenhouse gas emissions termed ‘Carbon Budgets’. This approach has now been used as a model for action across the world, and is mirrored by the United Nations’ Paris Agreement.

We have been among the most successful countries in the developed world in growing our economy while reducing emissions. Since 1990, we have cut emissions by 42 per cent while our economy has grown by two thirds.

This means that we have reduced emissions faster than any other G7 nation, while leading the G7 group of countries in growth in national income over this period.

We have outperformed the target emissions reductions of our first carbon budget (2008 to 2012) by one per cent and we project that we will outperform against our second and third budgets, covering the years 2013 to 2022, by almost five per cent and four per cent respectively. Our economy is expected to grow by 12 per cent over that time.