London set to be greenest city in the world

London set to be greenest city in the world

The Mayor of London has unveiled his plans to transform the capital into the ‘greenest’ city in the world by 2050.

His ambitious scheme includes targets to improve air quality, increase the use of renewables and halve food waste with the overall aim of becoming carbon neutral.

The London Environment Strategy (LES), published after extensive research among residents and businesses, includes targets to increase London’s current solar PV capacity by 20 times by 2050, reducing CO2 emissions by 40% by 2020 against a 1990 baseline, and introducing zero-emissions zones in some town centres by 2020, five years ahead of the previous target, to help businesses encourage the use of electric vehicles. 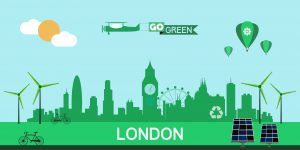 “I’m delighted that so many Londoners have got involved and given their feedback on the future of London’s environment,” Khan said. “In order to protect it for future generations, we must take tough action now – we have already done some fantastic work, but there is lots more to do, and we need all Londoners, and the Government, to play their part.”

One key objective is to bring nitrogen oxide (NO2) levels in London’s air below the legal limit by 2025 – the same date set out in the government’s Air Quality Plan. With air pollution in London reaching the legal limit for the whole of 2018 less than a month into the year, the mayor has said he wants to meet this target early and adopt even tighter World Health Organisation air quality guidelines. The law currently requires that the hourly measurement of toxic NO2 must not exceed 200 micrograms per cubic metre (µg/m3) more than 18 times in a year.

He also plans to set up an energy supply company which delivers “fairer” energy prices to Londoners by supporting fuel-poor homes and offering a green tariff.

The strategy also aims to reduce CO2 emissions by 40% against 1990 levels in 2018-2022 – a higher reduction than the government’s own target  and one which is compliant with the Paris Agreement’s pledge to limit the global temperature increase to 1.5C.

Other targets include halving London’s food waste per person by 2030, increasing green cover by investing £4m in tree planting, and making London the world’s first ‘National Park City’ by summer 2019 by protecting, improving and expanding its parks and green spaces.