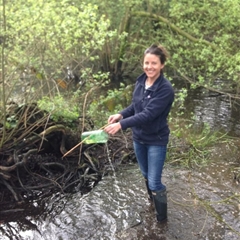 A new approach to great crested newt licensing being rolled out across England has been welcomed by Syntegra’s director of ecology.

Great crested newts have seen dramatic declines in their populations over the last 60 years despite being protected under UK and EU law, with approximately 50% of ponds in the UK lost in the 20th Century. It is an offence to disturb the species, and landowners or housing developers must apply for a licence before undertaking any building work on or around its pond habitat.

The ‘District Level Licensing’ scheme better protects the newts by operating at a landscape rather than at site-by-site scale and using conservation payments from developers to create new habitats in locations that will benefit the species and avoids the need for lengthy and costly delays to developers.

The ‘District Level Licensing’ (DLL) scheme is currently already available across 32 local authorities but has now been extended to 37 other areas.

The scheme is already being successfully being adopted by developers across the country. Barratt Homes’ Chilmington Green Development was the very first development in Kent to join the scheme there. Once complete, Chilmington Green will include over 5,500 new homes, four primary schools, land for community and leisure use, open green space, and local recycling facilities, as well as six new ponds placed in the best locations for great crested newts.

Paul Kitchingman, Managing Director, Barratt Kent, said: ‘This innovative scheme could provide the house-building industry with an alternative offer that can both enhance ecological habitat and species protection, whilst enabling developers to rise to the government’s challenge of delivering new homes at pace.’

The traditional licensing system has focused on management to prevent harm on individual development sites rather than addressing the wider health of populations of great crested newts.

The DLL approach seeks to redress this balance, encouraging targeted efforts towards placing newt habitat in areas where surveys show it will most effectively boost populations of the species at a landscape scale.

Under the programme, developers make a conservation payment to join their local scheme which covers the creation or restoration of ponds. New habitat created will be maintained and monitored for 25 years – all funded by the initial payment.

Natural England is working to make district level licensing available across 150 local authorities, as part of a programme funded by the Ministry for Housing, Communities and Local Government (MHCLG).

Trish said: ‘I back this move as a clear message that local authorities need to promote biodiversity net gain when considering planning applications. Anything that on the whole would ensure the expansion of the great crested newt would not only benefit the newts but also other species – as well as ensuring net gain for developments.’ 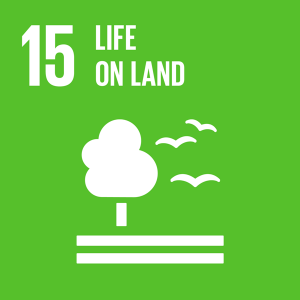 Goal 15 states: A flourishing life on land is the foundation for our life on this planet. We are all part of the planet’s ecosystem and we have caused severe damage to it through deforestation, loss of natural habitats and land degradation. Promoting a sustainable use of our ecosystems and preserving biodiversity is not a cause. It is the key to our own survival. 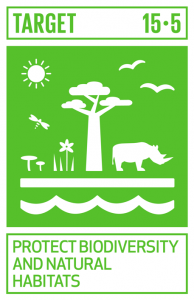 15.5: PROTECT BIODIVERSITY AND NATURAL HABITATS
Take urgent and significant action to reduce the degradation of natural habitats, halt the loss of biodiversity and, by 2020, protect and prevent the extinction of threatened species.