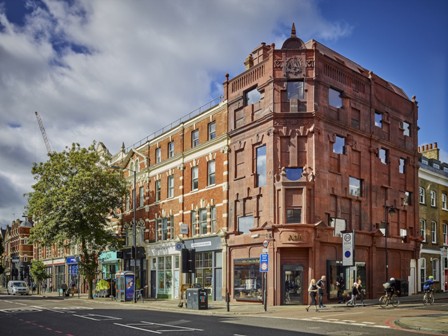 168 Upper Street, Islington, London A project Syntegra Group worked on in several roles has won a prestigious national award. The conversion scheme at 168 Upper Street, Islington, London, saw the development of three apartments and a shop from a Victorian commercial landmark. The rebuild, overseen by Groupwork, won the RIBA 2019 London Award and […]

The project encompassed installation of 2231 solar PV panels including framework and ancillary electrical equipment on 9 buildings. 602.37 kWp of roof mounted solar PV was installed over three buildings on site by Kingspan Energy Ltd. The modules were attached to the roof using a railed mounting system which attaches to the top sheet […]

SBEM (or Simplify Building Energy Model) is a software tool developed by BRE for the Department for Communities and Local Government and provides an analysis of a building’s energy consumption. SBEM is used for non domestic buildings in support of the National Calculation Methodology (NCM), the Energy Performance of Buildings Directive (EPBD) and the Green […]

It is important to understand the factors that influence the performance of solar thermal systems as they can be an ideal way to provide extra hot water to supplement energy delivered by heat pumps or boilers.  A solar system can therefore be designed to deliver hot water reliably and meet the requirements of the household.  […]

Energy Consultants are professionals who have studied and worked in the field of energy and or engineering, they are experts capable of helping individuals and businesses reduce the cost of their energy needs by designing an energy saving strategy and helping the company to implement this program by switching to alternative low carbon technologies. By […]

Solar PV hit new heights in 2012, but change is ahead

In 2012 more than 31 GW of new solar PV was installed. This growth in the market came despite the economic crisis and was lead by Europe. Europe accounted for more than 70% of the new installations in 2011 and 55% in 2012. Germany installed the most in 2012, followed by China, it seems that […]

In October 2011, the Department of Energy and Climate Change (DECC) announced a cut of 50% of the solar feed-in tariff resulting in the reduction of 97% of solar power installation. Indeed, the relatively high feed-in tariff was attractive to install the renewable source . It is a push to help people. Nevertheless with the […]

Ghana will soon welcome a solar PV plant of 155 MW which will become the largest in the country and one of the biggest in the world. This will increase by 6% the generation capacity of the country and will meet by itself the 20%  of the 10 % of electricity generated by renewable technologies. […]

Building simulation has long been a highly effective method of assesing the energy performance of a building and the more simulations that are performed the better the outcome.  However, changing the various parameters takes time, limiting the number that can be performed.  The problem has been addressed by a programme led by IES that has developed […]

Solar panel installations have risen dramatically since the introduction of the feed-in tariff incentive and even with the intended cuts to the tariffs by government there is still optimism in the industry about further growth especially with the launch of the Green Deal. However, increased installations have led to a rise in leaking roofs being […]

A few domestic energy schemes have been launched in Leicester, Wolverhampton and Dudley aiming at delivering energy savings to communities.  The schemes will help councils and housing authorities save energy and benefit from low carbon technologies.  Solar PV has been installed on a few hundred homes that can save their energy bills approximately £120 per […]

Confusion over deadline for FITs cuts

Solar installation has been a surprising success for the UK. The government has helped this growing industry through the payment of feed-in-tariffs (FITs), a subsidy allowing investors in small-scale renewables to sell units of the electricity produced to a supplier of their choice. Introduced in April 2010 by the previous Labour administration, the tariff was […]

The Dogs Trust Rehoming Centre at Roden is the first building for the BREEAM commissioned ‘Outstanding’ category.  Through achieving 100% of the available credit on management, energy and water use, the clientd finally reached a BREEAM score of 94.44%.  Aiming at sustainability from the beginning, the existing Canine Rehoming Centre for the Dogs Trust was […]

What is Solar energy?

Solar energy is the energy of sun light. The temperature of the Sun’s surface reaches to a value of approximately 5,762 K. The Earth’s perimeter of 40,000km results in an intersected sun power of 174,000 TW. Attenuation by the atmosphere results in a peak intensity at sea level of around 1 kW/m2, giving a 24 […]