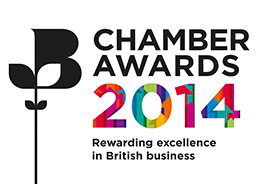 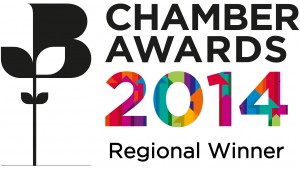 Chamber member, Syntegra Consulting, (Syntegra) based in Reading, is celebrating after being crowned one of the winners in the South region heats of the Chamber Awards 2014. The British Chambers of Commerce (BCC) Chamber Awards, now in its 11th year, is a highlight of the business calendar, showcasing the pivotal role local businesses play in the UK’s continuing growth story.

Having won the both the Sustainability Award, and Young Person in Business awarded to Florian Cassandro, Syntegra will now go forward to represent the South in the national finals, which take place in London in November. Both Awards were presented at the Energy Forum, held in Bracknell. The Sustainability Award was presented by Jon Newsham of sponsors Utilitywise to Director, Alan King and the Young Person Award by Brian Shewan, the Forum host.

Alan King said: “We are proud to have received this regional Award not only for the work we have done to reduce energy consumption in our building but for the savings we have made for our clients overall. This currently stands at over £6m. I am particularly pleased that Florian has also been recognised by the BCC. He is an asset to the company and comes up with remarkable out of the box solutions to very technical problems. He heads up our building modelling division and in charge of our CAD and IT. This division alone accounts for 20% of our first quarter turnover. Florian has been given responsibility at a very young age and thrived on it”.

Watch out for a success story about Syntegra in the next issue Brian Shewan, Florian Cassandro, Jon Newsham & Alan King of Business Voice.