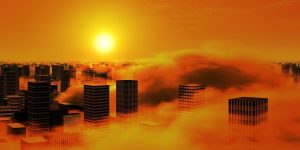 Almost 90% of people in a UK survey on air quality said the public does not enough information on air pollution – with more than 80% saying a greater awareness would make them try to minimise their negative impact.

Almost three quarters of the 4,063 respondents to a survey conducted by energy supplier E.ON wanted daily updates on air pollution included in the weather forecast.

Most described air pollution as an important issue in terms of the environment and wellbeing.

Those who said they would try to change behaviours if they were made more aware of the issue mentioned driving less – typically by swapping short-distance trips for walking or cycling.

Called ‘Change the Weather’, the service is being delivered in partnership with weather data provider ETN, to media outlets and local authorities. Some of the first to introduce the service include the London Evening Standard, the Daily Record and the I.

Syntegra MD Alan King welcomed the development and said’the issue of air quality is one that is critical to all of us. It is entirely right that it is brought to the attention of the public. Greater awareness and education could help many more people make even slight adjustments to their behaviours which could have a tremendous impact on pollution levels and ultimately people’s health.’

Pre-pandemic, most urban areas in the UK registered illegal levels of nitrogen dioxide (NO2) pollution, and the nation’s overall levels exceeded World Health Organisation limits. The UK Government has even been taken to court over its approach to air pollution by environmental law firm ClientEarth three times.

Lockdown restrictions did lead to improvements in air quality. In London, for example, concentrations of pollutants averaged 26.2 ug/m3 on March 25th 2020, compared with 43.0 ug/m3 on the same day in 2019.

But there are warnings that emissions and pollutants from transport are likely to rebound from next year without major interventions from businesses and policymakers.

Many businesses are exploring programmes of continued remote working in the future, avoiding business travel and commuting by individual petrol or diesel cars wherever possible.

In his recent green policy announcement, Prime Minister Boris Johnson confirmed that the UK’s ban on new petrol and diesel car sales has been brought forward to 2030.

Ensure healthy lives and promote well-being for all at all ages.

Target 3:9 REDUCE ILLNESSES AND DEATH FROM HAZARDOUS CHEMICALS AND POLLUTION

By 2030, substantially reduce the number of deaths and illnesses from hazardous chemicals and air, water and soil pollution and contamination.